“Reflecting on Master Ding’s visit I am in awe of his integrated and snakelike movement and grace. He exemplifies the concepts spiraling, looseness and effortlessness. He and his assistant modeled sincere happiness and willingness to work with us of little skill. Simply watching him on YouTube and in video is inspiring to practice more often and loosely.”

“Watching Master Ding and Shifu Liu gave me the impression of watching water in human form – flowing yet substantive, both graceful and strong, humble yet uplifting.  I am grateful for such inspiration.” 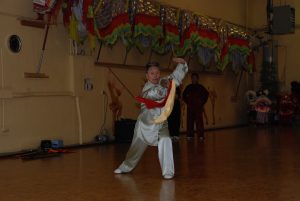 “The take-away for us was the gift of watching the Tai Chi concept of continuous motion beautifully demonstrated in real time.  Much thanks to Laura and the other members of the club that worked on bringing Master Ding and Teacher Liu to Boulder.  What a wonderful gift to all of us.”

“I was moved by the wonderful demonstrations by both of our guests Ding, Shuide and Liu, Yuelan.  Here were some of my specific reactions:

I was thankful that our guests were persuaded to do the entire Yang style form.  It was beautiful and graceful. I appreciated the focus that each of the experts brought to their performances.  Seeing this level of performance in person had an impact on me that I think was far more profound than that I might have experienced by watching a video of these Tai Chi performances.

I was particularly impressed by the vigor and focus demonstrated by Master Ding.  After seeing his vibrant performance I reflected a little on the history through which this man has lived.

At 81 years of age, he would have been born into the middle of a violent period of Chinese history that started around 1911 and extended for almost 40 years.   As a very young child he probably experienced at least some effects of the Japanese interventions in China and the ensuing struggles.  He would have lived through the painful birth of the People’s Republic and through the tumultuous history that unfolded thereafter.  He would have experienced the Cultural Revolution during which, as I understand it, life was not easy for those who practiced traditional arts.  More recently, he must have experienced reactions to the rapid industrialization and associated changes in China.

Despite living through all these dramatic historical events, Master Ding presents himself with a wonderful upright posture and an apparently strong spirit.  He is alert and rather charming.  I was impressed that his demeanor often displayed a rather playful quality.  There is nothing about him that seems depressed or tired or defeated.  To the contrary, his level of energy and engagement are quite astounding.

I was particularly intrigued by the demonstration of two person practice forms and with the push hands demonstration.  I look forward to being able to practice those exercises at some point.

Master Ding also demonstrated a quality that I associate with masters in various fields.  He made the performance of his art look easy.

I was impressed and I felt very lucky to have been present at the event.” 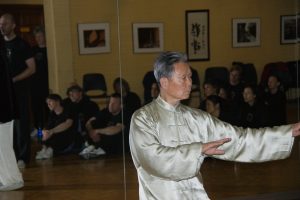 “It was such a great privilege to meet and watch Master Ding and Liu. They were so inspiring and it was a wonderful experience. Without a doubt this is something to study and practice for the rest of my life. Thank you Laura for all you did for us.”

“Words seem inadequate.  But I thought of the 10 essentials advice to “maintain continuity…like flowing water.”  Masters Ding and Liu seemed to present the definition of maintaining continuity.  I noticed no minute breaks in central equilibrium, just beautiful, inspiring continuous motion.  Master Ding maintained strikingly upright posture and full life-gate throughout.  I would like to attain that level of tai chi over the next several lifetimes, with his sense of humor!”

“Master Ding is Tai Chi in its purest form.
Watching him I saw the physical and felt the spiritual perfection.”

“Words cannot express, but awesome, exhilarating and truly inspiring come to mind.  I found Master Ding’s
sense of humor to be very enlightening and heart-warming.  He left us all with a very precious gift.”

“I admired Master Ding’s  graceful moves in his forms, amazingly elastic frame and push hand skills, humbleness and easy going personality,  his patience and eagerness to share. He inspired me to work on all these area and apply them to my daily life, focus on nurturing my body for the years to come. Hope I will be as light and agile as he is if I ever reach my 80’s!”

“I appreciate so much this club and Laura and the teachers for creating an environment that welcomes such wonderful teachers.  I feel very lucky to be a member!

Being in the presence of such teachers seems to be instructive in and of itself.  From Master Ding I felt how his shoulder blades separate from his midline, moving away from his spine to allow his torso to snake away from contact in push hands.  I get that his hips do the same thing in relationship to his sacrum.  He and Ms. Liu were both so strong and agile – very inspiring!”

“When he was allowing me to interact with him while demonstrating what he was saying to me, it was a very strange experience. I think there was some confusion due to the language differences, but one thing that stood out to me was that he didn’t seem to be DOING anything to me except in response to what I was doing. In the moments where I was not doing anything, neither was he. It was only in those moments when I moved that he moved in response. Initially, it seemed as if when I started to push on him, he just stopped being there to be pushed. Then later when I tried to move, he simply countered my movements but without seeming to exert much force. His movements felt very easy and effortless. His reaction was always directly proportional to my action. I hope that Ray was able to get all of that on video and I will be able to watch it sometime. Being in the middle of it, I was not really able to comprehend all that was happening since I still have a hard time just being aware of what I’m doing myself. Seeing it from the outside would be valuable I think.

I am very impressed not by his knowledge of tai chi, but by his understanding of tai chi. That sort of thing is extremely valuable. And while his answer to my question was not exactly what I was asking for, I think it gave me everything I needed in order to find the answer for myself, which will give me not just the knowledge I was seeking, but the understanding of that knowledge. That’s brilliant teaching!

It was a real honor to be able to see him in person and hear what he had to say and to learn from him. I have a feeling that even after thinking about everything I saw and heard for a while, I’ll still be getting new insights from it months or years from now. Thank you so much Laura and all for making this happen; for hosting them, for translating for us, and everything else you did! I was blown away, nothing like I expected, but far better! I can’t wait to see Master Chen, but I’m glad it’ll be a few months away so I can let all of this soak in for a while. :)” 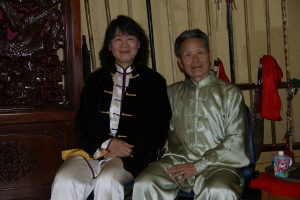