Master Ding, who is a very vigorous 80 years young, was born in Zhejiang, China in 1930.  He started his formal training at 13 with a renowned martial artist of the Er-Mei School.  He later studied with Master Niu Chunming, a 4th generation Yang style Tai Chi lineage carrier and a student of Yang Chengfu. In 2008 Master Ding was selected as one of the 10 best Chinese martial artists of the 21st century.

Shifu Liu Yuelan began her Tai Chi training with Master Ding in 1991 and is now his lead assistant. She is proficient in various traditional Yang style Tai Chi Chuan forms including sword, saber, and push hands and has won numerous medals in Chinese national and provincial Tai Chi competitions. In addition to leading the Yang Style School in Hangzhou, she has taught Tai Chi in Japan and other East Asian countries.

The April 13 presentation consisted of demonstrations of Yang style Tai Chi forms and push hands. Gu Feng students were first treated to a dramatic demonstration of the complete 85 posture traditional Yang style form, as taught by Yang Chengfu.  Then Shifu Liu and Master Ding performed sword and saber forms.  Finally, two person exercises were demonstrated.  This last part of the demonstration provided Gu Feng students with new insights into the relationship between various Tai Chi postures and their applications.  All of the performances demonstrated mastery, grace, control, power and beauty.

During an extended question and answer session, students and Master Ding had lively interaction that provided opportunities for insightful and often humorous observations by Master Ding.  At one point, Master Ding explained that all Chinese martial arts are related at their root. Then, in a manner slightly reminiscent of the attitude of a proud parent, he pointed out how these various Chinese arts are now spreading across the globe for the benefit of many more people.

To illustrate a point during part of his discussion, Master Ding invited a student to try and push him.  Later, that student (Keith Dunnigan) commented, “[I]t seemed …[that] when I started to push on him, he just stopped being there to be pushed.  When I tried to move, he simply countered my movements but without seeming to exert much force.”

Gu Feng Club instructor Rebecca Tsui captured the sentiments of many when, after the event, she noted that she “admired Master Ding’s graceful moves … [his] amazingly elastic frame and push hand skills, [and his] humbleness and easy going personality.”  She also commented upon his patience and eagerness to share.   Finally, she articulated a reaction of many event participants as she pointed out that she hoped to be “…as agile as he is if I reach my 80’s!” 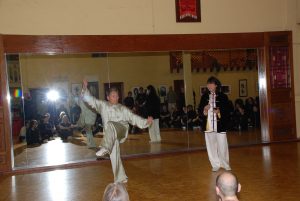 Master Ding Shuide was born in Zhejiang, China in 1930. When he was only 13 years old, Ding began his training with Master Feng bin who was a renowned boxer of the Er-Mei School.  Then he continued studying with Masters Zhang Guifang and Niu Chenming (牛春明), both important descendants of the Yang family style of Taichi.

Since 1994, Master Ding has written several articles and books, and also produced many CD recordings on Taichi. In 2008 he was selected as one of the 10 best marshal artists in 21st century of China.   Master Ding served many important positions throughout the years.  He is now the Director of China Yongnian International Taichi Society, the Vice-chairman of the China Folk Wushu Master Society and the Chair of China-US Yang style Taichi Association. 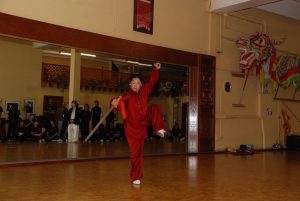 Shifu Liu Yuelan was born in Zhejiang, China in 1956. She began her Tai Chi training with Master Ding Shuide in 1991. She is proficient in traditional Yang style Tai Chi Chuan,
Sword, Saber, Push Hands, and many other forms of Tai Chi. She has been invited to Japan and other Far Eastern countries to give seminars and demonstrations. Shifu Liu won numerous silver and gold medals in various national and provincial Tai Chi competitions since 1998. She has served as the Chief Secretary of Zhejiang Martial Arts Association, and a high level judge for major Tai Chi Chuan Competition in Zhejiang. She is considered as the 6th generation of Yang style Tai Chi chuan descendants.